Oh HAPPY FRIDAY!!! It’s true – it’s going to happen! NKOTB is reunited and ready to conquer the world again! NKOTB announced on the Today show this morning that they will release an album this summer and a fall tour!!!!!! If you saw the show, it was raining and still groups of fans (who looked a lil’ older than the usual teen crowd =)) showed up and were screaming their support for the “kids”. If I lived in New York – I would have been there too! One woman even had one of those gigantic NKOTB buttons that I had back in the day!

If you’ve been following my blog – you know that I’ve been in love with the “New Kids” since I was a lil’ girl. Click here for proof! I just can’t wait to go to their concert (and yes I’m going to find a way to go!!!) and sing along to “The Right Stuff”, “Cover Girl” and all their other songs!!! Remember:

LOL – I can’t believe I remember the lyrics. I think I was 10 when that song came out. So, here is a current pic of our favorite “kids” all grown up and looking fine. The first pic in 14 years!!! 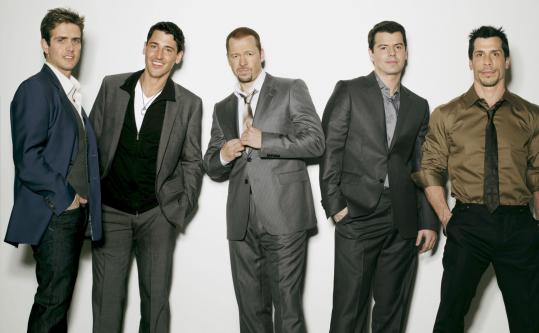 (left to right): Joey, Jonathan, Donnie, Jordan and Danny. Umm…yeah…they look pretty good to me!!! I still don’t know about Danny (right), but I think I’m going to start signing my name “Mrs. Joey McIntyre” again… I don’t know about Jonathan’s wavy hair in the front either. And I miss Donnie’s cut up jeans and Jordan’s hair tail…LOL! I bet my sister is getting a kick out of this! =) If it’s possible, she’s a bigger NKOTB nut than I am! She remembers Jonathan’s birthday! HAHHAHAH….